It’s never too late to recap one of the greatest conferences of the year; especially when this year’s event is just eight months away. I’ve had the honor of participating on the Planning Committee for the last three GPUG Summits (Tampa, Nashville and Phoenix) which gave me the opportunity to help decide what content is presented to more than 1,800 GPUG attendees. It wasn’t until last Summit in Phoenix that I actually was able to present a session, and it was awesome. The GPUG community is truly an amazing community to be a part of. Here are some of the highlights from last year’s Summit.

It takes a lot of brainpower and hands to make Summit what it is today. I’ve heard stories about when it first started there were only around 100 attendees, and now there are more than 4,000 and 1,800+ just for GPUG. I often wonder how far in advance planning starts for an event this size, and I’ve been told years. Locations are always known a year in advance which means our friends at Dynamic Communities are for sure working on locations two years out. It’s not until May that the Planning Committee is put together to comb through 100’s of session proposals and by mid July the schedule is pretty much set. Participating on the Planning Committee isn’t a walk in the park either. Bob McAdam, General Manager of GPUG assigns you to a track, and there are partners and end users that then work together to decide on what session proposals make the cut. Sometimes there are debates, and sometimes it’s easy to decide based on the feedback on a similar topic the prior year. Either way, it’s a big responsibility that I don’t take very lightly.

I received an email letting me know the Planning Committee selected two of my session proposals and the excitement kicked in; after all this was my first time presenting at GPUG Summit. The best memory from the event was Amber Bell, owner of Training Dynamo, and I presented a session called “SQL Views + SmartList Designer = Super Cool Excel Reports.” We had prepped for weeks and even met up the day of the session and prepped some more. We were so confident in what we were teaching that the nerves seemed to turn into excitement. We made it to our room early and proceeded to round up GPUGer’s from the hallways and even nearby rooms. The stage was set, and there was no turning back now. We had a room full of very eager users that wanted to learn, and thankfully they came ready to play as well. Amber and I had the room cheering and laughing throughout the whole session…truly memorable.

Another one of my favorite things about GPUG Summit is the Medic Desk. I’ve volunteered to be a medic so many times that I can’t even remember how many Summits I’ve done it…3/4 perhaps. The Medic Desk is where you can learn from and connect with Dynamics experts on a personal basis including: MVPs, experienced fellow users, Microsoft Engineers and Support Technicians.

I’ve used the word “community” throughout this blog and when I say that I truly mean that. A couple weeks before Summit I came up with an idea for a #PenniesForTaylor fundraiser, and when I contacted my good friend Brianne van Reenen to ask if she wanted to help, she didn’t think twice. If you’re not familiar with Taylor’s story, then just click on the hashtag above to learn more. Long story short, when someone in your community needs help, you help! Brianne and I were able to come up with a marketing plan to collect as many #PenniesForTaylor as we could; as it turned out bills helped as well. Thanks to everyone that gave during Summit, we were able to raise over $650 for Taylor and his family.

All Good Things Must Come To An End!

Since this was my 5th Summit attending, I’ve learned that it’s not always fun to head to the airport with thousands of other users, so I stayed an extra night and attended an NFL football game with some friends. My hometown team the Broncos took the win in a blowout game against the Cardinals. At this point, my feet hurt, and I’m tired – but that doesn’t stop me from meeting up with friends in the hotel lobby for some #AdvancedNetworkingOppertunities one last time. It’s always great to hang out with my friends I’ve made throughout the years from being a GPUG member.

Join me October 15-18, 2019 in Orlando, FL for this years #UserGroupSummit.
Make sure to register early for the best rates and book your hotel as soon as the block of rooms open.
Summit User Group 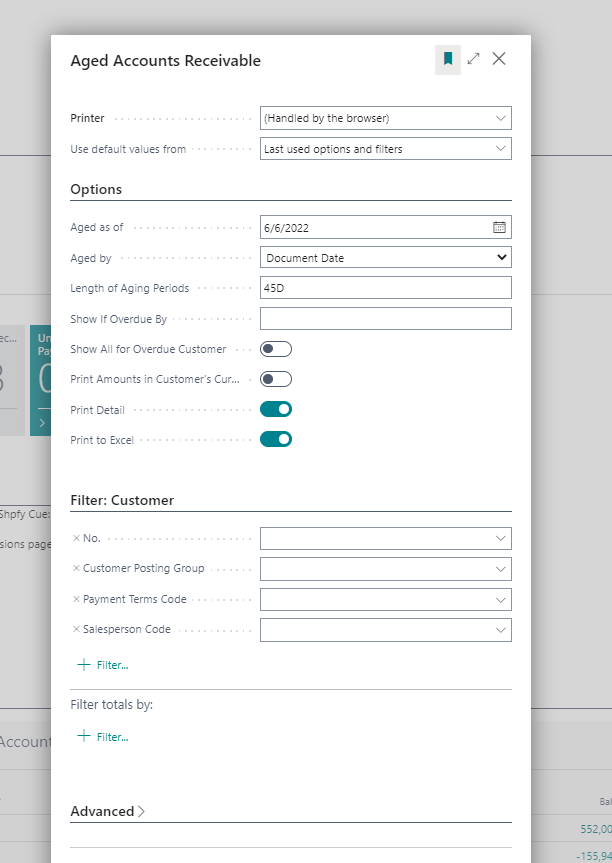 I had a client ask me if the Aged Accounts Receivable report could be modified a bit since he was having to modify it manually and it was taking him around 6 minutes each time. As I started discovery on what he wanted I asked him what his requirements were.  Aged by = Document Date Length of Aging Periods = 45D Print Detail = Yes Print to Excel = Yes Include a Pivot Table with the following information: Customer name Total balance due Total over 45D due Top 3 customers Percentage of 45D due vs total balance due To get started I asked him to send me a screen shot of the Aged Accounts Receivable options window to verify how he is running the report.  I also asked him to send me a copy of the Excel file with his changes in it for me to review. Next Steps Next step was for me to figure out if I was going to have a developer create a custom report or if I was brave enough to try something I've never done before. I went the brave route and started searching through Microsoft Docs for Rep
Read more

Applying posted credit memos to posted invoices isn't a hard task to complete in Microsoft Dynamics 365 Business Central. The example I use below is for a vendor credit, but the same process applies to customers.  Version: US Business Central 20.0 Open up the vendors list. Search for vendor that you'd like to apply the credit memo to an invoice for.  Click on Balance field to open up Vendor Ledger Entries window. This will show all the 'open' documents on the vendor ledger. Select the line for the Credit Memo that you want to apply to a posted invoice. Click Process > Apply Entries Within the Edit - Apply Vendor Entries window select the line(s) that you'd like the credit memo applied to.  Click Process > Set Applies-to ID This will put the users name into the Applies-to ID field on the line selected. To post the application select Process > Post Application. Written by: Kristen Hosman, Microsoft MVP
Read more