- September 09, 2020
I've officially been a Microsoft MVP for 13.5 hours, but who's counting. I wanted to sit down this evening and write about how I felt this morning when I opened the email from Microsoft letting let me know that I was awarded the 2020-2021 Microsoft MVP award for the category Business Applications. 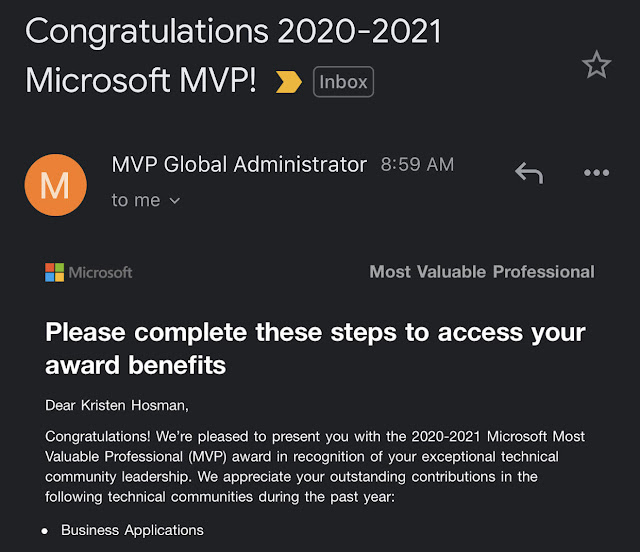 My story isn't that different from other MVP's in the sense that we all love our jobs and we love helping the community. It's been a personal goal of mine since 2019 to get a nomination and it wasn't until February 2020 that I actually wrote "Goal MVP" on the board in my office. I decided early on that I was never going to ask an MVP to nominate me because deep down I wanted someone to see the hard work I was putting into presenting at conferences, blogging, and the passion I had for the Microsoft Dynamics community. After all my whole career is based on people believing in me and giving me a chance to do something I've never done before.

It's crazy to think that my career started way back in 2000 when my first job was a cashier in a small town in Minnesota. I spent my week after school and some on the weekends working at a grocery store as a cashier and stocking shelfs. One of my duties was to keep track of the outstanding balances for customers and collect the balances when they came into the store to pay. I was always trying to be creative and suggested to the owners many ways we could make the process better. My love for process improvement clearly started early in my career.

Fast forward to my time at a casino. I was attending college full-time and working overnights at a casino as a cage cashier. In high school I took an Accounting class and it ended up sticking so I declared an Accounting major. While working at the casino I was able to apply for different jobs within, so I went from being a cage cashier to an AP clerk. This is where my passion for Dynamics GP started. Working as an AP clerk I was able to work with departments across the organization and learn about how they operated simply by paying the bills. The Accounting Manager and CFO ended up moving me into another role as soon as they noticed that I had mastered the AP Clear role and then I was an Accounting Clerk. Wasn't in that position long as I was promoted to an Accountant within a year. This is where I got my experience talking with department heads and other C-level individuals. I was managing month end for many departments, holding monthly variance meetings, managing bank reconciliations, and fixed assets. Finally I had mastered my role again so I took a chance an applied for a position with a Microsoft Partner as a Dynamics GP Consultant; mind you I had no experience in consulting what so ever.

The interview that changed my career

I interviewed with Jack Boyer, owner of Boyer & Associates, in December 2012. I got the dreaded call "you didn't get the job....but." It's the next sentence that changed my career and my life as it is today. Jack continued on and told me he really needed someone with experience right away but he would be calling me in a few months once he could hire me. I'd be lying if I didn't say that I wasn't skeptical at this point. I had a close co-worker that knew I was interviewing and I told him the conversation I had. He assured me that I would find something soon and would be onto my next adventure.

In January 2013 I got a call from Jack. I was at work so I didn't answer it but I was so nervous and yet excited to listen to the voicemail he left. I went into a conference room and listened to the voicemail and immediately ran to my co-worker and told him. I couldn't believe it...Jack wanted to hire me and I didn't have any consulting experience. I accepted the job and started the next month. I remember being so nervous that first day but Jack paired me up with one of his consultants Ron and he is the one that started teaching me the in's and out's of implementing Dynamics GP. Shortly after I was put onto my first project and to this day I remember the doubts I had regarding if I'm doing things right. The consultants and Jack assured me I was doing a good job and the project was a success.

I ended up leaving Boyer & Associates early 2014 for a Controller position at a medical label manufacture. While there I was able to work with Boyer on implementing Dynamics GP and SalesPad to replace QuickBooks and another outdated inventory/manufacturing system. I learned many valuable lessons at this job that I continue to use daily.

Since then I've worked for another Microsoft Partner and started my own company Mount Evans Consulting. I've been able to assist several Microsoft Partners with implementing Microsoft Dynamics 365 Business Central worldwide.

In June I got a call from Boyer asking again, if I would join their team full-time. It was during the same time that Steve Endow, Microsoft MVP, also reached out about an MVP nomination. The year 2020 has sure been a strange year with COVID-19 but I accepted a position back at Boyer and I accepted Steve's MVP nomination.

Sitting here telling my story I can see that I'm right where I should be and that's where my Dynamics consulting story started with Boyer & Associates. Jack saw something in me just like Steve did and I truly feel like I'm living a dream. Thank you Steve for everything you have given me. I look forward to continuing to help the Dynamics community through blogging and presenting at conferences.

Helping in the Dynamics community

I started volunteering within the Dynamics GP User Group (GPUG) on the planning committee back in 2016 after Bob McAdam asked me to join the committee. Since then I've been able to assist on the planning committee for GPUG for five years and this year I also joined the Dynamics 365 NAVBC side as well. I've been able to lead and co-lead several sessions throughout the years at Community Summit, hold webinars, and I've also helped with the Denver GPUG chapter as a co-chapter leader. I continue to help the community by writing blogs about Dynamics 365 Business Central.

The morning I found out I was a Microsoft MVP

I woke up knowing that today or October 1st, I'd find out if I was awarded the Microsoft MVP. I had just dropped my two sons off at school and was returning home when the email came. I instantly was in shock and yelled to my husband "I got it" and he was so confused as to what I was talking about. Once I was able to calm down and he knew what I was talking about he hugged me to congratulate me.

I am still in shock and humbled by this award. I am thankful to everyone in my career that has believed in me and pushed me to be better. I wish I could list everyone out, but I'd sure to miss someone.

Funny story when I picked my boys up from school and told them I was now a Microsoft MVP my youngest correlated it to a basketball player winning MVP of a game. After explaining to him it was quite different he was just as excited as I was.

It's now September 9th and I'm finally ready to post my story. Over the past week I've been contacted by many giving congrats and advice. I am truly humbled by this award and I look forward to helping the Microsoft Dynamics community however I can. Thank you all that have helped me along the way.
Kristen Hosman, Microsoft MVP

- August 25, 2020
Voiding a check in Dynamics 365 Business Central is easy. Follow the steps below. Search for Check Ledger Entries window Search for check number you wish to void Select Process >  Void Check  Type of void: Unapply and void check - if the check is applied to an invoice select this so the invoice can be repaid after the check is voided. Void check only - if the check was printed but not applied to an invoice then you can select this.
Read more

Being able to purchase completely blank check stock for Microsoft Dynamics 365 Business Central (BC) is a plus, however you'll have to know how to configure the system so the MICR line prints on the check stock. Microsoft added the MICR checks functionality in early 2020 and using it can be a challenge to use if you're not familiar with modifying layouts in BC. I'll walk you through the process of being able to use this functionality. I will be showing you how to do this within my Production environment test company. I will then show you how to update your production company once you've completed your configuration and modified the check layout.  You should also test within a test company and test with your bank prior to updating in production company. If you're only modifying check layout and not using MICR line then you should be ok not testing with your bank first.  Bank Account Card First step is adding the bank account and transit numbers to the bank account ca
Read more